The surprising evolution of plant-based margarine

What does Napoleon III have to do with the development of margarine? Quite a lot, as it turns out. The origins and evolution of plant-based margarines involve a lot more history — and dramatic changes in how people eat — than you might expect.

The forces that have driven human food options and preferences go way beyond simple habit or taste, and no food showcases this better than plant-based margarines.

Napoleon III, nephew of the more famous Napoleon I, was the first president of France from 1848-1852, but then declared himself emperor, becoming the last French monarch. Due to food shortages in 1869, Napoleon offered a prize for someone to develop a dairy butter alternative for the armed forces. French chemist Hippolyte Mege-Mouries created “oleomargarine,” shortened to “margarine,” using beef tallow.

In 1871, Dutch company Jurgens bought the patent for margarine from Mege-Mouries and manufactured the first non-dairy spread. Jurgens joined with competitor Van den Bergh to form Margarine Unie. That company would later merge with the Lever Brothers to become Unilever.

Unlike early spreads, which relied mostly on ingredients like beef fat and lard, later experiments with vegetable oils achieved more success. Spurred in part by shortages in the supply of beef fat in the early 20th century, advances in hydrogenation of plant materials and the ability to harden oils improved on the product, leading to the first plant-based margarines. Manufacturers combined vegetable oils with animal fats to create their margarine.

Necessity is the mother of invention

Especially during times of food shortage and rationing, such as World Wars I and II, alternatives to dairy butter were in demand. In the 1940s, development of the votator process and the spreads tub made high-quality spreads at lower fat levels possible. By the 1950s, most margarine or oleomargarine used primarily plant-based oils in their products. 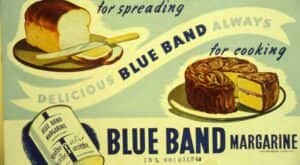 Not your grandmother’s margarine

Some improvements in nutritional content of plant margarines began in the 1960s. Then, in 1990, began the elimination of trans fats and introduction of omega-3 rich plant oils into margarines. But the most dramatic makeovers of plant-based spreads have occurred in just the past decade.

Today, we are taking on the challenge of producing more natural and healthier products that taste good — and are better for the environment. Some of our newer variants, Country Crock Plant Butter, for example, contains no trans fats and is available in olive, almond or avocado oil varieties. The product comes in sticks and tubs, to be easily used for baking. I Can’t Believe It’s Not Butter! It’s Vegan! is also a completely plant-based margarine. These newest products use only simple, natural ingredients like plant oils (sunflower, sustainably sourced palm and rapeseed), fava bean protein, sunflower lecithin, water, salt and natural flavourings.

Consumers today also care about environmental sustainability and the carbon impact of the food system on the planet. Producing plant-based foods like non-dairy spreads generates lower greenhouse gas emissions and encourages more responsible use of land, water, fuel and fertiliser.

From a simple means to feed a French army to a way to increase one’s health while being easier on the planet, our plant-based margarines have evolved to become a trusted staple in many households worldwide.

From Plant to Spread

Interested in how we make our delicious plant margarines and spreads? Here’s how the magic happens, from plant, to oil, to...

With a constant influx of contradicting scientific studies, journalistic exposés and video documentaries all telling us the latest “big discovery” in...